April 8, 2015 – Posted Under: General News
There is more than one legend of how pawnshops’ trademark symbol of the three balls came about.

The first is probably the most popular. The trademark symbol of pawnshops’ three balls was established in the second decade of the 19th century by the Medici families in Italy and the Lombards in England. Both of these families were moneylenders in Europe. According to legend; one of the Medicis, who was employed by Emperor Charles the Great, fought a giant and killed him with three sacks of rocks. The three balls (or globes) later became part of their family crest, and ultimately, the sign of pawnbroking. 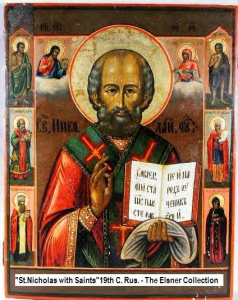 The second is the story of St. Nicholas who is the patron saint of pawnbrokers and bankers. He was born to a wealthy, Christian family in 280 AD in Patara, Turkey where he was eventually ordained into the priesthood at the age of nineteen. He quickly became known for his selfless acts of generosity.

The legend has it that before St. Nicholas was ordained, he gave three bags of gold coins to a man in need in order for him to save his daughters from poverty. As time went on, bankers and pawnbrokers would hang three golden balls above their doorways as a tribute to him.

Because of St. Nicholas’ kindness, his legend quickly became renowned which caused his transformation to Father Christmas and then to Santa Claus, worldwide.

The third and less known legend of the pawnbrokers’ symbols of the three gold balls is based on a Roman coin used in Israel circa 68 A.D. and onward. It was called the “Shekel of Israel,” and it has a picture of a sprig of three pomegranates on one side (see photo), which was issued after a Jewish revolt against the Romans.